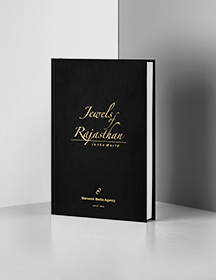 A coffee-table book on several of those Rajasthan-origin people across the world who have in one way or the other helped their state grow.

An exclusive ode to the 64 Rajasthanis settled in six different countries, the book narrates the way they have walked an extra mile to accomplish their dreams. It features decision-makers and influential people in echelons of power, who have left a mark in the society in their own terms.

this coffee-table book was unveiled during 10th Pravasi Bharatiya Divas 2012 in Jaipur.

These are not just success stories, but beautifully illustrated life stories of these people. It was unveiled during the 10th Pravasi Bharatiya Divas 2012 in Jaipur on January 8 by Mr CK Patel, who is referred to as a beacon, a socio-political powerhouse and a hotel magnate in the USA.

The aim that Maneesh Media now strives for is forming a bridge between those who look for inspiration and those who can inspire.

With this book, we were the donee of immense appreciation and accolades.