Seasons of Hope: Memoir of David Musila - Subscribe to Newsletter 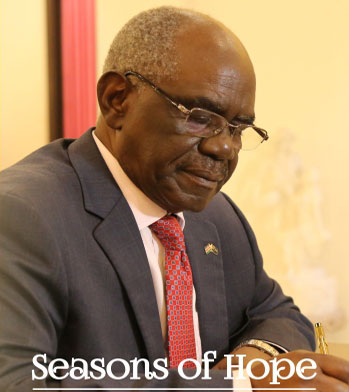 A teacher, a politician, an administrator, above all a gentle human being who focused on the best for his country, Hon’ble David Musila, a former senator, has been a dedicated Kenyan throughout his life and continues to be so. The autobiography, Seasons of Hope – Memoirs of David Musila, is a book full of hopes; it has a capacity to restore faith. An amazingly inspirational story of a person who has encountered enormous odds, heartbreaking challenges, pitfalls, intrigues, disappointments, betrayals, never-ending friendships, forever lessons, key decisions, eye-openers. Musila has seen the darkest hours of his country, and polished his leadership skills over the years. A young administrator of the age when Kenya gained independence, the times when Kenya was seeing a sunrise, he gained experience and stature from the ranks of District Officer to Provincial Commissioner. It was a critical time for the country, with the history being rewritten, colonial settlers were in retreat, in fear, in anger, in disbelief, for indigenous Kenyans were in charge.

The book delves deep into his extraordinary life, from his birth in a colonial Kenya to his studies in the USA to his starting to serve the country and cuts across the reign of four Presidents. While writing his memoir, Musila has shown utmost honesty, and has often talked of things that were talked of only in hush-hush voices or rather never talked of!

Musila’s first assignment was to address the thorny issue of land and resettlement in the independent Kenya, which he performed so well that many new challenges were confidently thrown at him, which he gracefully accepted. Alert, observant, keen, good listener, record maintaining, he learnt all that well, but politics is all together a different set of challenge, which becomes disheartening at times. While he already the best upbringing behind him, he also earned himself the best mentors, combining the two made many people jealous even as several tried to pull him down. Land adjudication and resettlement; peace-making with the then ruling party, KANU; unabashedly serving Kenyans in various capacities, have been few of the highlights of his carrier.

Beyond everything, Musila went on to perform every duty well; as a human, a son, a brother, a husband, a father, a Public Administrator, a leader, peace makers. With David Musila Foundation, he has started working against the grassroot of all issues… lack of education and support to those who really need it to understand their needs towards growth.